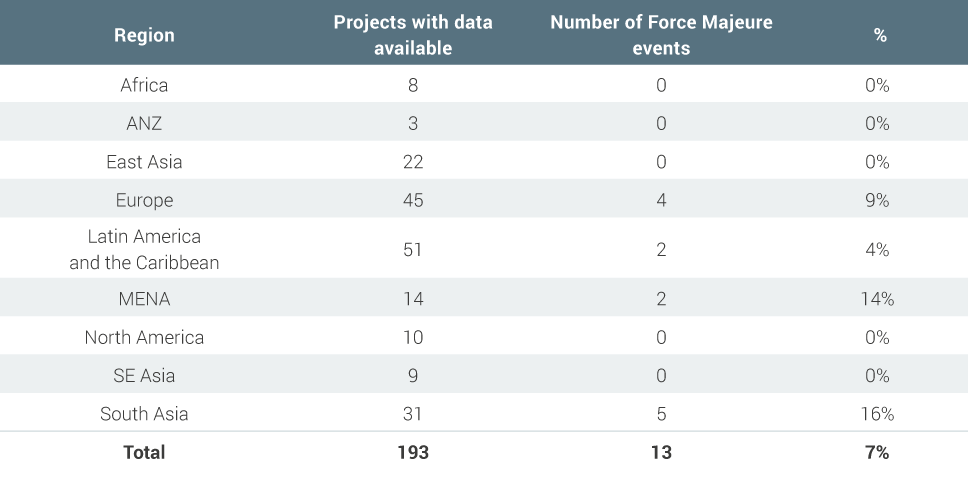 Our study uncovered seven examples of force majeure in the projects researched. Two of these were related to events that were entirely external to the project; one project is located in Crimea, which was invaded by Russia, while the other one is in Egypt which experienced a revolution during the Arab Spring. Other events were classified as force majeure, however where not entirely unrelated to project risks. The Bajo Almanzora Desalination Plant in Spain experienced flooding which halted operation of the facility, and there is an ongoing dispute regarding whether this counts as a force majeure event. Workers strikes were the cause of three of the force majeure events; Navayuga Quazigund Expressway in India, Bahia Outfall water treatment plant in Brazil, and the Lazaro Cardenas Second Container Terminal in Mexico.

While it is not possible to draw many conclusions on the prevalence of force majeure events with so few examples, five of these events did take place in India, which suggests that PPP projects there do have a higher tendency to suffer from this issue, but may also be a reflection of the number of PPPs in our sample located in India. The Mahan Tori Power Plant had to reduce its operations after its coal allocation was removed by a Supreme Court ruling in 2014, while the Shrinagar Hydro Electric Project suffered from flooding. The Procuring Authority on the Talcher II Transmission Line was not granted the necessary authority to carry out its obligations, which was defined as force majeure. The events also lasted for a long time, with each example lasting for 3-4 years.